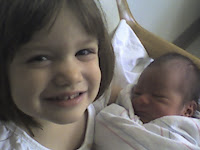 Here’s a pic of Isabella holding Griffin Daniel Mancini. Quite unexpected. Breach babies are not supposed to come early! They’re supposed to come when they are scheduled. Clearly an early act of petulance.
My wife and I were just talking about how ready we would be for the new baby. We had two more whole weeks to get diapers, wash sheets, get the bassinet out of the garage, etc. Luckily we had most of the heavy lifting done. The baby’s room was painted and setup and the garage was converted to my new office. I’m calling it an office because wives get angry if you call it an “escape dome”
Suddenly Audge started having sharp pains on the morning of July 2. She called the doctor and he said to put heat on it as sharp pains are generally not labor pains. Our last baby was a C-Section too so she had no idea what labor pains felt like. An hour later she was feeling worse and the doctor said what I was fearing: “Go to the hospital” We left around 10 am and the baby was out by 1:00 pm with an emergency c-section. It was a hassle, but you can’t really beat the time efficiency. In fact, it happened so quickly when I went back to get the camera by the time I got back to the OR they had already started making the first incision. They could have at least waited until I was behind the curtain I did not need to pull a Dorothy and see the Wizard. Behind the curtain is just fine, thank you. So speedy delivery aside, everything went well and everyone is healthy, so that’s all you can ask for.
This did make me laugh. While we were being prepped my wife’s labor pains got worse. After an hour or so of labor pains, my wife simply looked at me and said “This whole labor thing is for the birds.” Ah yes, truly the downside of being a mammal. Why do you think birds lay eggs?

How I Knew Not To Take My Four Year Old to See Coraline.

The Evolution of Dad

Long Ago and Far Away